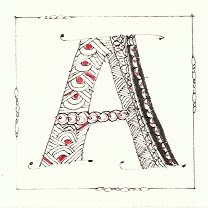 This is from the first alphabet from last year--Black and White and a touch of red. Highly influenced by playing with zentangles.

This is from the second alphabet--"party neuland".

I live on the west coast of Canada in Burnaby, B.C. (Burnaby is a suburb of Vancouver, home of the 2010 Winter Olympics).

I am a retired high school teacher-librarian. Calligraphy has been my hobby for about 30 years. I always enjoy playing with pens and inks, pencils, etc. I am actively involved in two local calligraphy groups: Alphabeas Calligraphy Guild and the Westcoast Calligraphy Society (visit us on the web: http://www.westcoastcalligraphy.com) Until the end of December I was the webmaster for Westcoast--at least today the website is still as I left it. I love learning about calligraphy, attending classes, workshops and conferences. I also belong to IAMPETH, the International Association of Penmen, Engrossers and Teachers of Handwriting. I like both broad edge and pointed pen work and think both can produce stunning work.

I also organize a yearly envelope exchange for calligraphers around the world. I am taking participants until January 20. You send one envelope a month for 11 months. Details and sign up can be found here: https://docs.google.com/spreadsheet/viewform?hl=en_US&formkey=dEJWWHB2bElJZkZNWUZLbE9ydDFyWGc6MA#gid=0

One of my brothers lives in Brisbane, Australia and in 2001 I was actually in Maleny! I still wear a Peruvian handmade vest that I bought there.

I followed ALAW in 2010 and enjoyed seeing everybody's work. Last year I decided that I had to participate. I didn't always keep up with my letters, but I did finish both alphabets by the end of the year. I am looking forward to playing again this year.
Posted by wendy at 2:20 PM