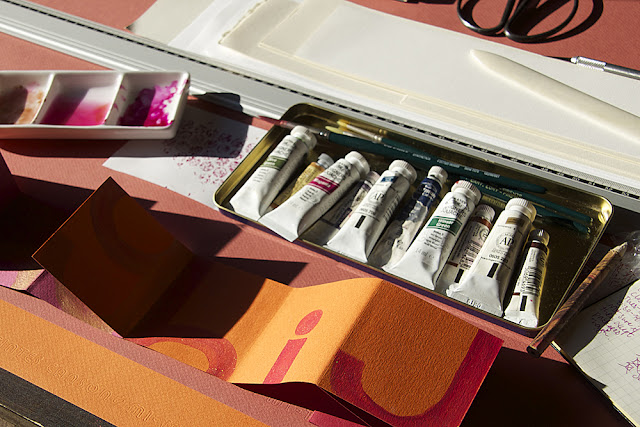 This is my first time participating in ALaW, and am so glad that I came across this great project in time to join in before the year had gotten too far along. It has been so much fun visiting the ALaW blog to see everyone's ideas taking root and beginning to evolve.

It's typical for me to spend quite a lot of time turning ideas over in my mind before beginning, so I haven't made much progress yet, but this week I have finally made it to the drawing board. And now that I have a few images to share, it seemed like a good chance to introduce myself.

I am an American artist and writer living in Florence, Italy. A research trip for a book about Florence's piazzas brought me here for what was supposed to be four months, but I think somehow I knew that I wouldn't be leaving that soon (it's now been 7+ years!). My degree is in Architecture, but I prefer working on small scale projects that I can not only design myself, but also execute myself. I love the book as a medium, and have been exploring artists' books again after a long period devoted to writing + creating the maps for the 'piazza' book.

Although it seems like many of you are off and running with the letter-a-week challenge, I thought I would document my considerably slower beginning in case there are others who are also still in the 'incubation' phase. One reason it has taken a while to figure out how to begin my first alphabet is because I wanted to have an idea of what shape the letters would ultimately assume as a group. (I'm pretty sure that at least one set will come together in book form.) Another reason it's been hard to get started is because I can't seem to decide which media to choose―watercolor, collage, beads & wire, photo-based, computer-generated? 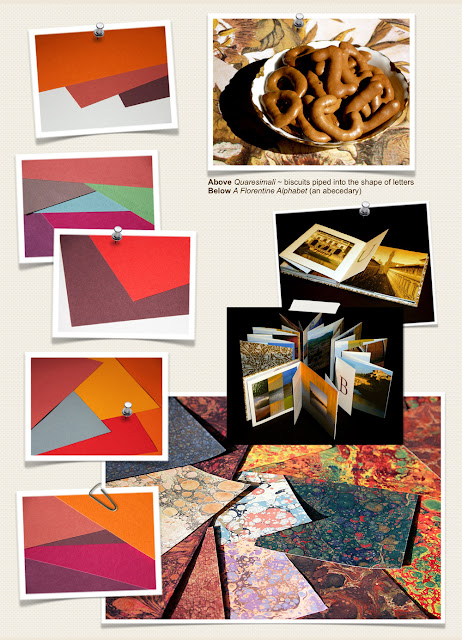 The first thing that came to mind when I envisioned my alphabet was letters in different shades of  brightly colored Canson Mi-Teintes ...one color for the overlayed letter, and then another for the background. In preparation for this, I photographed various sheets of the brightly colored papers juxtaposed with one another [some examples are shown on the 'pinboard' at right]. The process of arranging / photographing made me wonder about creating more 'complex' designs, i.e. using several colors for each letter. I like the geometry of the triangles formed by the arrangements, and this may also end up being incorporated into the design. I also gathered bits of Florentine marbled paper left over from other projects [lower right on the pinboard]. I love the classic Italian pattern of  'spots/blobs' colliding & overlapping, and am considering them for the dotty-themed letters.

Another possibility would be to base one of the alphabets on a Florence-inspired abecedary that I made a couple of years ago...I had originally envisioned each letter being original/different and somehow relating to the concept I had chosen for that letter. But since there wasn't time to hand-create each letter individually, I instead ended up using Arno Pro as the font throughout. [The abecedary can be seen in the two photos on the pinboard, in which the 'U' & the 'B' are visible. The upper right photo shows a small plate of quaresimali, a type of biscuit piped out in the shape of letters; these appear in Italian bakeries each year during Lent. There's more info about them HERE, where I also discuss making the abecedary.] 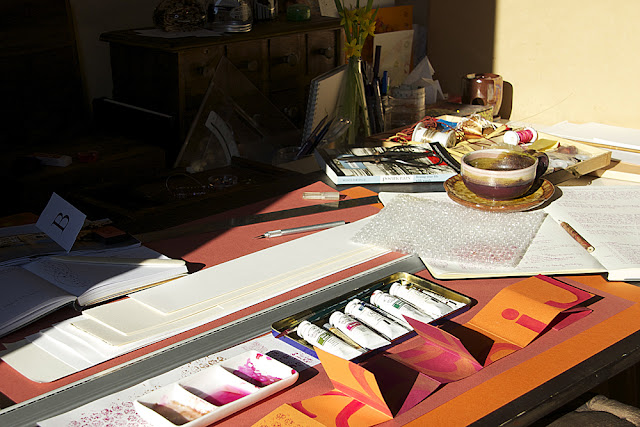 As I prepared to experiment with the letters today, I assembled various things from around the studio: tubes of watercolor/gouache paints (which I've been wanting to try for ages); narrow strips of paper left over from past projects (to fold into little books); a piece of bubble wrap to either lay over other papers or use as a 'stamp' (an interesting effect that I may explore further). Further rummaging turned up a little mockup booklet in different shades of Canson; the pages turned out to be exactly seven centimeters square, so it seemed a perfect place to experiment with the letter forms at the correct scale.

I like the idea of offering hints of the letters, as opposed to showing their full shapes, so I began painting parts of them on each seven-by-seven square; next I may try each letter somehow linked to the adjacent ones as well, and ultimately they may end up being more 'calligraphic'/decorative. We've been lucky to have long strings of ideal winter days in Florence―cold but blue-skied (my sympathies to all of you enduring the wet summer in Australia)―and it was such a pleasure to see the gold gouache shimmering in the sunlight as it flowed from the brush...I wish I knew how to capture things like this with my camera. Anyway, I had a lovely time painting several preliminary letters, and it feels good to have made a start, no matter how small. We'll see where it leads...

Thank you for all of the inspiration you've given me; I am thrilled to be part of the group (and next time I hope to have more images to show and fewer meandering thoughts/unresolved issues).

Posted by Arzigogolare at 8:45 PM