I have gone full circle and am back to more legible letters again, but I didn’t feel that these should have traditional forms either. I wanted the letters to have lots of movement, so I distorted them slightly by changing the angle of the stamp when printing, playing with their proportions and placing them at various angles within the square. This is the first of my 5 alphabets that is in lowercase and I don’t know why ‘i’ was the first letter I tried!

I started with a small wooden stamp which is a square with a hole (dot) in the middle and used a black stamp pad on layout paper. I ended up using layout paper because, together with the texture of the stamp pad, it resulted in a more interesting effect.

I added different coloured sequins, more dots, ‘sprinkled’ throughout the letters, sometimes covering the hole in the stamp, other times not, to create even more movement.

These letters have been hard to photograph as it was difficult to get the shine and colour of the sequins to show up, so some of the letters are distorted and the paper doesn’t look white either. 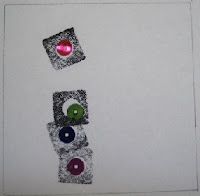 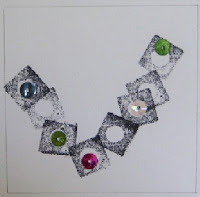 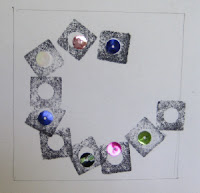 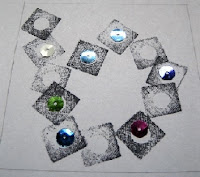